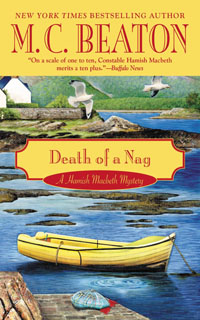 Death of a Nag

After a romantic disappointment and an undeserved demotion, Scots village bobby Hamish Macbeth decides a week's holiday at the coastal village of Skag might be just the ticket.

He's dead wrong, of course: the food is dire, and the man in the next room nags his wife so loudly and continuously that more than one person at the Friendly House bed-and-breakfast wishes him dead, though only Hamish is heard threatening him.

When this chap's body is found floating in the river Skag, Hamish is the prime suspect. While clearing his name, the lanky Scot has to deal with the widow who's suddenly making eyes at a refined bachelor, two leather-skirted Glaswegian beauties intent on raising disco hell, and the rude revelation of one family man's secret life. Some holiday!