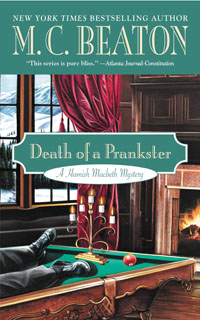 Death of a Prankster

When police constable Hamish Macbeth receives the news that there has been a murder at Arrat House, home of the relentless practical joker Arthur Trent, he doesn't race to the scene of the crime. After all, last time he was called to investigate a death at the isolated Scottish manor, the 'victim' turned out to be Trent's manservant covered in fake blood.

Thus prepared for another prank, Hamish arrives to find that Trent has been most decidedly murdered and for suspects there is a houseful of greedy relatives, all of whom are more than interested in the contents of the will rather than the crime at hand. And when the Chief Inspector arrives on the scene and his former flame, Priscilla Halburton-Smythe, gets involved as well, Hamish quite clearly has his hands full.