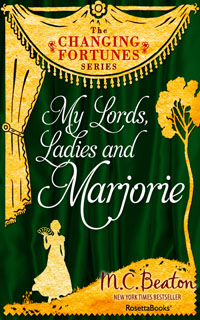 My Lords, Ladies, and Marjorie

Miss Marjorie Montmorency-James was lovely, young, and very impressionable. All these characteristics contrived to help her fall in love with a certain Lord Philip’s picture when it appeared in the newspaper. Until the day she saw Lord Philip’s photo, she had only fantasized about a mysterious lover whose shadowy features were never quite clear.

Now she had a real live nobleman to dream about.

Little did she suspect that she would soon meet Lord Philip in the flesh. How could she imagine such a thing? After all, what could justify a daughter of the middle class rubbing shoulders with the nobility?

Then suddenly that great day was upon her; she was to meet Lord Philip. But nothing turned out the way Marjorie expected it would. Love - and danger - lay waiting for Marjorie in London…