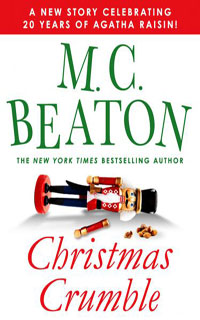 At home alone for the holidays, Agatha Raisin decides to host a dinner party for the elder residents in her Cotswold village of Winter Parva. Agatha’s never been much of a homemaker, but she’s dead-set on making this the perfect holiday for the “crumblies,” as she affectionately calls them. She’s decorated a tree while fending off her cats Hodge and Boswell, and even made a (lumpy) Christmas pudding in between swigs of rum. But when Agatha dumps the pudding on the head of the local self-proclaimed lothario—an eighty-five year old with a beer belly and fingers like sausages—his death by dessert proves more than a trifle as mysteries mount higher than the season’s snowfall. So much for trying to do good by her neighbors. Now Agatha needs no less than a Christmas miracle to get herself out of this one...