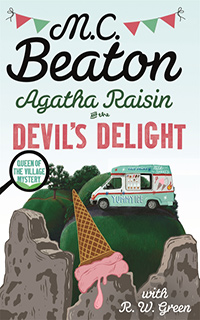 Toni and Agatha are in the car on the way to Officer Bill Wong’s long-awaited wedding when, much to their shock, a naked young man bursts through a hedge on the side of the road and comes running toward them.

Terrified, he explains that he has just seen a dead body in the woods. Toni lends him an old t-shirt to cover himself, Agatha calls the police, and the young man takes them to the spot where he saw the body, across from a meadow where the Mircester Naturist Club is due to have its annual summer barbecue.

The young man, Edward, explains that he is the club’s social convenor and had arrived early to set things up. He says he found the body at the edge of the woods, near an ancient stone known as The Lone Warrior and said to have once been used as a sacrificial altar.

When they reach the spot, however, there is nothing on the large, flat rock except a small wet patch. Even that has dried up by the time the police arrive, and Chief Inspector Wilkes accuses Agatha of wasting police time on a prank.

But Agatha and Toni grow suspicious after meeting some of the club’s members, whose diverse interests range from artisanal ice cream to ancient curses. And when another disappearance occurs, it’s up to them to put together the pieces... or end up on the altar themselves.