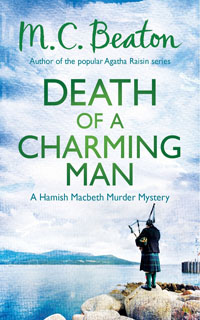 Death of a Charming Man

Now that Priscilla Halburton-Smythe has agreed to marry him, Police Sergeant Hamish Macbeth can't imagine a more perfect life. There's not much crime in his remote Scottish village of Lochdubh, nothing much at all to do but fish, drink coffee, and slouch around. And now to spend time with lovely Priscilla.

But his days aren't as tranquil as his dreams. For one thing, Priscilla's renovation schemes are driving him out of his cottage. Not to mention her ambitious plans for his career as a policeman away from Lochdubh. This might be a good time to find out why Peter Hynd's arrival in nearby Drim was causing so much trouble.

An attractive, unmarried man with an independent income would always attract attention in such a small place. But this time Hynd's arrival seems to have caused bitter rivalry among the women of Drim. Hamish finds their petty fights amusing and a clever excuse to avoid Priscilla and her schemes for a new electric stove (to replace his beloved woodburning appliance), a posh new bathroom, and virtuous nutrition. Amusing, that is, until death threats, physical abuse, and murder make statistical history in one of Scotland's most picture postcard-perfect towns.