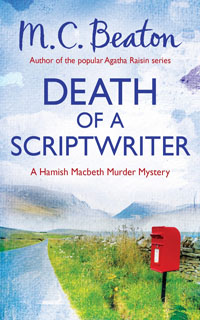 Death of a Scriptwriter

Patricia Martyn-Broyd, now in her seventies, has retired to the Highlands. She hasn't written a word in years and her books are out of print. But now a television company is about to film her last detective story, featuring the aristocratic Scottish detective Lady Harriet Vare. Even better, a London publisher is bringing the book into print. Even though the snobbish Miss Martyn-Broyd doesn't care to mix with the locals she can't help but share her excitement with local policeman Hamish Macbeth.

Imagine her horror when Miss Martyn-Broyd discovers that Lady Harriet Vare is portrayed as a pot-smoking hippy, that the screenwriter is known for his violent and scurrilous scripts and that Lady Harriet is going to be played by the scene-stealing trollop Penelope Gates. But a contract is a contract, Ms Martyn-Broyd quickly learns and when she is accused of murdering the scriptwriter and the leading lady, she turns to her one friend in Lochdubh, Hamish Macbeth, to help her.