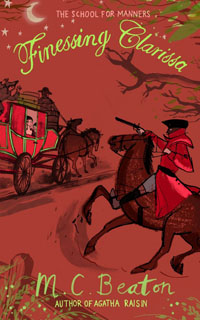 The School for Manners #4

In the fourth volume in the School for Manners series, we meet another of the young ladies deemed unsuitable for the marriage mart because of some awkward attribute. This time it is the remarkably clumsy Clarissa Vevian, whose Junoesque proportions and flame-colored hair make her a daunting prospect for marriage-minded dandies. Dispatched to London by her despairing family, she is taken in hand by the redoubtable Tribble sisters, Amy and Effie, who tutor, groom and pummel her into shape for an accident-ridden debut. When the Earl of Greystone, a most eligible bachelor, finds the unconventional, freckle-faced beauty entrancing, we know the Tribbles can relax until the next client appears.