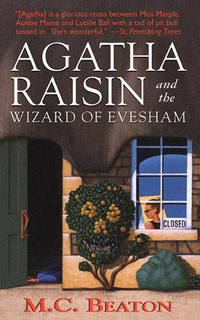 The Wizard of Evesham

After a home dye job ruins her hair, Agatha Raisin, the prickly yet lovable amateur sleuth, turns to the wonderful new hairdresser in the neighboring town for help. And as Agatha soon learns, Mr. John is as skilled at repairing her coiffure as he is at romancing her heart. But the charming Mr. John isn't all he appears to be. According to gossip around the salon and the village, some of his former clients seem to be afraid of him. Could Mr. John really be a ruthless blackmailer? When a murderer strikes at the busy salon, Agatha must discover the truth and the killer's identity before it's too late.