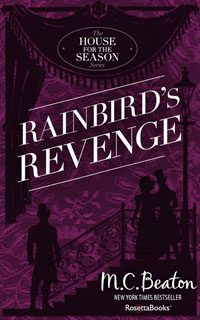 A House for the Season #6

When the Duke of Pelham returns to his town house at 67 Clarges Street, he is grimly determined to find a suitable wife--but completely unprepared for what the Season has to offer. The duke’s title alone has always brought him more than his share of feminine attention; claiming not to believe in love, he has never been spurned by a lady. The duke’s self-imposed search is soon disrupted by the arrival in London of Miss Jenny Sutherland, a spoiled but beautiful country girl whose vanity is her tragic flaw. According to her guardian Aunt Letitia, lack of competition has made Jenny put on airs; in London, she will get the set-down she sorely deserves. Indeed, at her first important London party, Jenny’s blatant disdain for the duke leads to certain disaster. But no one has counted on the intervention of John Rainbird, the shrewd and resourceful butler at 67 Clarges Street. Rainbird befriends Jenny, suggesting she look in the mirror a little less often. The result is a mischievous scheme that will insure Jenny’s social success and determine the fate of the close-knit family of servants at 67 Clarges Street.