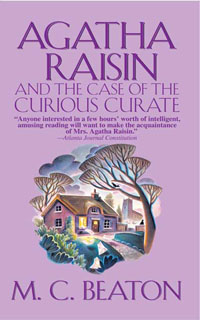 The Case of the Curious Curate

Agatha Raisin is feeling miserable—and with good reason. Her ex-husband, James, has abandoned her, and she’s been humiliated by an unseemly proposition from John Armitage, her handsome neighbor. So complete is her devastation that Agatha has given up on makeup and taken to wearing the loose cotton dresses and flat, sensible shoes she has always abhorred.

But there is light at the end of this dark and lonely tunnel, and its source is Carsely’s beatific new curate, Tristan Delon. With his golden hair, large blue eyes, and perfect mouth, Tristan has attracted the interest of more than a few of his female congregants. And to her surprise, he seems to have taken a special interest in Agatha.

Despite his charms, however, there is something odd about the curate, and after he’s found dead in the vicar’s study, it’s up to Agatha and John to investigate.