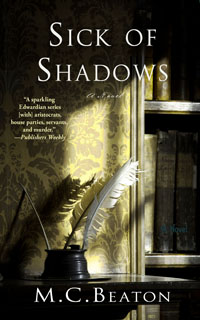 Captain Harry Cathcart and Lady Rose Summer have entered into an engagement of convenience-convenient for Rose, who wants to avoid being sent to India with all the other failed debutantes. Despite her considerable good looks, Rose's sharp intellect and radical ideas have served to repel her would be suitors. Rose's parents, unaware of the deception, are hardly thrilled that their only child is marrying a man in trade, but Harry comes from a good family, and at the very least, they hope he will keep their troublesome daughter out of mischief.

Unfortunately, even a pretend engagement cannot save Rose from trouble. Bored with endless parties, teas, and balls, she befriends Dolly Tremaine, a beautiful young girl newly arrived from the country and overwhelmed by the demands of the Season. Rose is delighted to have a protégée but their friendship is cut tragically short when Dolly is found floating in a river. Harry is summoned immediately to help solve the mystery of Dolly's death, and to keep Rose from being the murderer's next victim.