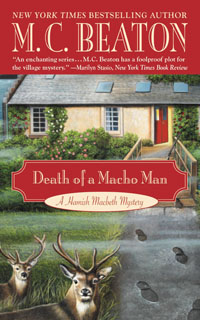 Death of a Macho Man

The unconventional Hamish Macbeth finds that his own impetuousness places him at the center of a murder investigation.

Everyone in the Scottish Highlands village of Lochdubh called Randy Duggan 'the Macho Man'. Duggan went around the village and bragged about everything he had done and said he once was a wrestler in America and an explorer in the Middle East. At first his outrageous stories drew an admiring crowd at the local pub, but soon his bullying ways lead to anger and violence.

When Hamish tries to break up a fight, Duggan challenges him to a public fistfight. But on the day of the scheduled fight, Duggan is found shot to death. Of course, Macbeth's superiors get wind of the fight and suspend him during the investigation. Macbeth has some suspicions about Duggan's real background - and the mysterious banker, John Glover, who shows up at the posh Tommel Castle Hotel shortly before Duggan's death. And what about Rosie Draley, the sex-crazed romance writer, who had been having an affair with the two-timing Duggan?

Once again, Macbeth is in hot water and he must find a murderer to clear his name - and to get back his job and the cushy life (fishing and mooching around the village) he leads.