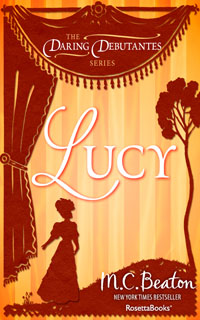 She was a lady’s maid who longed to be a lady. How else could Lucy Balfour hope to win the favor of Andrew, Viscount Harvey, the toast of the town, who seemed ready to take a bride at last? There was only one way to do, and that was to command his attention. It seemed an impossible dream. Even the first step was daunting: Lucy had to become the peer of her own mistress, the coldly beautiful Lady Angela, who was also determined to claim Andrew as her own.

But there was Hamish MacGregor, the wily old butler, who promised to make Lucy’s dream come true. With Lucy’s unaccountable good luck at baccarat, they could win a fortune. With his cunning, they would conquer London society as “father” and “daughter” and meet the king himself! Having served the rich, he knew how they operated and Hamish MacGregor was determined to beat them at their own game. And having met Andrew Harvey, Lucy Balfour determined she would never be a servant again.